A big conference on Asian Studies was held last week in Honolulu. Some prominent professors quickly put together a pannel about the earthquake and tsunami in Japan. This special session was going to focus on the human aspects of the tragedy, and the discussants included an anthropologist, historians, a jornalist and a political scientist. One of the questions asked to this pannel was when and where the tsunami debris would arrive. One of the pannel members, Prof. Ted Bestor of Harvard, offered a good answer, probably because he is familiar with the Pacific current system after years of studying fisheries in the region. However, this reflects how frequently this question appears: where and when the debris generated by the Japan tsunami will arrive. A question not only asked by ocean scientists, but by everyone.

Science aside, one of the problems I found myself dealing with is how to label all this material being transported in the ocean. As a researcher, I refer to it as debris. However, as a human being it is impossible not to think of it as important pieces of people lives: those were their houses, their memories: pictures, albuns, diaries, books, personal belongings and much more.

But again, as an oceanographer, studying transport in the oceans, this a theme of great interest for me. The North Pacific is already famous for the big “Garbage Gyre.” Since a great amount of debris was transported from Japan, the question remains: Where is it all going?

Two researchers here in the University of Hawaii, Prof. Nicolai Maximenko and programmer Jan Hafner (both working at the International Pacific Research Center – IPRC), modeled the dispersion of the debris, some probable distributions are shown bellow and you can find a link to their animation of the dispersion at the end of this post. 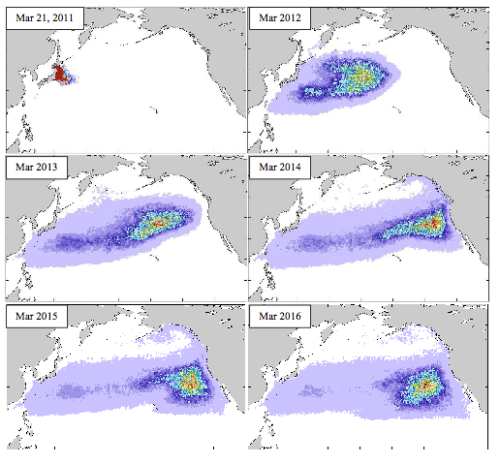 Probable dispersal pathways for the debris generated by the Japan tsunami. From: http://iprc.soest.hawaii.edu/news/press_releases/2011/maximenko_tsunami_debris.pdf

In three years, the debris will arrive to the west coast of the United States and Canada, moving as far south as Baja California in Mexico and as far north as Alaska in the US. Part of it will remain in the great garbage gyre, desintegrating into smaller pieces. In about five years, some of this material will again be washed ashore in the Main Hawaiian Islands. The consequences for marine life are still unknown.

Simulation of debris transport carried out by Dr. Nicolai Maximenko and Jan Hafne. From: http://www.hawaii.edu/newsatuh/2011/04/tsu

You can find the original at the UH news website http://www.hawaii.edu/newsatuh/2011/04/tsunami-debris/